Although many hunters in Texas pursue wild hogs and exotics throughout the summer months, the opener of dove season is traditionally accepted as the true opener of the fall hunting seasons. September can be brutally hot in Texas, especially the first couple of weeks but I always feel that we have the summer whipped once again by September. Nights begin to cool down and it usually get doesn’t get really hot until mid day, by then, most dove hunters strive to be back in their air conditioned trucks on the way back home or, in a cool motel room near the dove hunting fields. Regardless of the weather on opening day, we Texans are steeped in tradition and will do what it takes to be in a dove field come September one. The opening of dove season is a celebration of the hunt and anybody that’s spent much time in the Lone Star State knows that Texans know how to have a good time. There will be BBQ lunches and evening meals of grilled dove breast from Texarkana to Brownsville on the first day of dove season.

We’re fortunate to live in a state with the highest concentration of doves in the country. There has been a tremendous increase in the number of white wing doves from Mexico and south Texas the past couple decades. Today, it’s common to shoot white wings in north Texas and, on occasion, I’ve gotten into some white wing shooting in the northern counties that rivaled a good white wing shoot down near the Mexico border. The vast number of white wings across the border in Mexico traditionally draws thousands of hunters from Texas and across the United States but because of the drug related problems along the border, some of the more reputable outfitters are temporarily suspending hunts. Hunters in the right place at the right time will be privy to some very good white wing shooting right here in Texas.

The Eurasian Collared Dove is about twice the size of the mourning dove and makes excellent table fare. This ‘import’ was introduced into the Bahamas back in the mid-1970’s and has been sighted across the continent. Texas is now home to a large population of these birds. They seem to have an affinity for living close to humans. It’s common to hear their unique calling, especially during nesting season and see their nests in trees around the suburbs and in small towns. The introduction of most exotic species has resulted in ecological catastrophe and I’m wondering what impact these oversized doves will have on the native species. It would be just fine with me if they can cohabitate with mourning and white wing doves. I absolutely love hunting them and have learned that they grill up nicely when a sliver of jalapeno is pinned to the breast and wrapped with bacon!

Thanks to abundant spring and early summer rainfall across much of the state, dove fields are in excellent condition. Cam Bennett at Coffee Flat Ranch in Throckmorton and Young Counties offers dove hunts on about 900 acres and the fields are in excellent shape and native dove numbers are high. He expects a good opener but Cam, myself and anyone else that’s hunted dove know that these birds become extremely ‘flighty’ when the urge to migration hits. Doves are a ‘here today, gone tomorrow’ species but one thing’s for sure, without food they definitely will not congregate anywhere for long. I’ve seen fields loaded with birds one day then, with the passage of a wet cold front, seen the birds disappear. We can’t accurately predict dove hot spots a month before the season but, a ranch or farm with ample food and water are the primary factors that I consider when deciding where to hunt.

Here are a few tips I’ve learned through the years that will, hopefully, make your opening weekend more successful.

SCOUT FIRST- Most of us are limited to the fields we can hunt. Individual fields may not be ‘red hot’ on any given hunt but scouting before the hunt will insure you set up where your percentages are best. From a good vantage point, use binoculars during early morning and late afternoon and determine the flight pattern used by doves. Then, locate a good spot to ambush them. The end of tree lines, grown up fence rows or even high weeds adjacent a grain field can be good spots to hunt. If you’re hunting over a pond, chances are pretty good that dove have a particular area they prefer to come to water. These ‘watering zones’ usually are areas with clean banks that provide grit for the birds and protection from predators. Also, pay attention to the wind when choosing a spot to hunt. All birds take off and land into the wind.

CROSSING SHOTS ARE MOST DIFFICULT- For most hunters, crossing shots at dove are the most difficult to make, especially shots on fast flying birds. It’s very common to shoot behind birds flying right to left or left to right. Nothing sharpens the eye for these shots better than a few rounds of skeet or trap. Practice by beginning your shotgun swing behind the flying bird (clay target), seeing daylight behind your shotgun barrel and the flying bird and pulling the trigger. The trick for the shotgunner is just how much daylight is required in order to put the shot string at the exact spot where the bird will be! This study in physics has challenged the wingshooter since the invention of black powder and shot; it’s also what makes dove hunting so much fun. To my way of thinking, dove are the most challenging of all birds to knock down with a scattergun.

BLEND INTO YOUR SURROUNDINGS- Back in the early sixties when I first began hunting dove, blue jeans and a dark colored T shirt was the uniform of the day. Dove have excellent eyesight and from their elevated position, they can easily spot anything that looks out of the ordinary, (i.e. hunters) wearing solid colors. These days, I hunt dove in the same light weight, breathable camo I use for early season bow hunting. Wear camo and avoid movement until you begin your shotgun swing and chances are very good that you will have a heavier game bag at the end of your shoot!

RETRIEVE YOUR BIRDS IMMEDIATELY- Dove blend well into their surroundings and many are lost by hunters that take their eye off of a falling bird and shoot at another. Unless shooting over a recently cut grain field or an area with short grass, It’s a good idea to watch your bird hit the ground after the shot and go immediately to retrieve it, especially if you’re not hunting with a good retriever.

USE DECOYS- Ten years ago, decoys were seldom used by dove hunters but we’ve caught on to the fact that doves are flocking birds and they respond well to decoys just like waterfowl and turkey. Motion type decoys (spinning and flapping wing) have proved to be highly effective. On many occasions, I’ve had dove actually fluttering overhead above the motion decoys. The trick to decoying doves, as any bird, is positioning decoys so that they are not only visible to passing birds but to bring them within shotgun range. 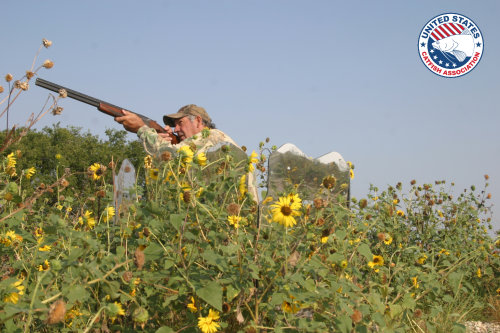 Outdoors writer Bob Hood behind his GhostBlind, takes aim at a fast flying dove on the Holt River Ranch near Graford.

USE A BLIND- Last season was my first to use the 14 pound GhostBlind (GhostBlind, mirror hunting blind, mirror blind, invisible hunting blind; camo ground blinds, tree stands) for hunting dove. These blinds have mirrors on the outside and conventional camo on the inside. They set up quickly and are highly portable. I found them most useful when setting up on the perimeter of a tree line or on the edge of vegetation. The trick to using this blind for any bird hunting is setting it up so that there is cover behind the shooter. Last season, I had incoming birds fly directly over the blind.