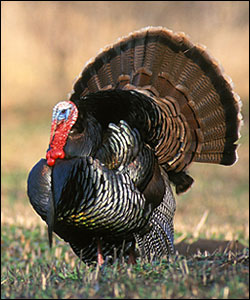 The adult male Eastern, called a gobbler or tom, may measure up to 4 feet tall at maturity and weigh more than 20 pounds. Eastern's are the heaviest of the 5 subspecies, and the turkeys found in the northern parts of the U.S. can really become large. Some of the corn fed gobblers in the upper mid-west (Iowa, Wisconsin, Missouri) have body weights over 30 pounds. Gobbler over 25 pounds are fairly common in those areas.

Chestnut brown-tipped tail coverts and dark-buff or chocolate-brown tail tips characterize the most abundant and most widely hunted turkey, the Eastern Wild Turkey. The gobbler’s breast feathers are tipped in black, while other body feathers are colored with copper or bronze metallic iridescence. The primary wing feathers have white and black bars that extend to the feather shaft, while the secondary wing feathers mainly have prominent white bars. This results in a white triangular area on each side of the back when the wings are folded backward.

A mature female, called a hen, may be nearly as tall but is usually lighter, weighing between eight and twelve pounds. Females are similar in color to the males but more brown, and the metallic reflections are less brilliant. Feathers of the hen's breast, flanks and sides are tipped with brown rather than the black and white tips of the male.

The Eastern Wild Turkey inhabits the eastern half of the U.S., and can be found in hardwood and mixed forests from New England and southern Canada to northern Florida. The western boundary of their range extends from east Texas up through eastern Oklahoma, Kansas, and Nebraska and then on into Minnesota. It has also been transplanted to California, Oregon, Washington, and Ontario, Canada and other areas west of the Rocky Mountains. The Eastern, which has adapted to many habitats, utilizes both hardwood and softwood forests, open pastures, and agricultural fields