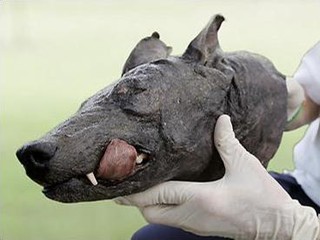 (Alright the Chupacabra isn't something that is hunted in Texas, but with the recent jump in curiosity by people all over the country, we just had to cover this one.)

An eerie myth of the Chupacabra has been in circulation for decades. The Mexicans claimed that the existence of the mysterious creature was in fact, true. The Chupacabra is believed to be evil, and feared by many Mexicans. Late exposure on news channels and Websites that calls attention to what used to be only a myth is now challenged by live footage.

The Chupacabra is a small animal, appearing to only weigh 25 – 50 pounds. It has short front legs and long back legs. It’s head is shaped like a hog head and has vicious teeth suspend from the creatures mouth. Overall, it is a funny looking animal and does give many the willies. It isn’t known, but only believed that the Chupacabra feeds on goats by sucking the blood out and leaving the carcass, much like a vampire. Common nicknames given to this spooky creature are Goat Sucker, which is a translation of Chupa Cabra, and Vampiro, which is a translation of Vampire, all Spanish origins.

Although the myth has existed for decades, the facts of anything other than appearance about the animal remain unknown. A carcass of the Chupacabra has been discovered in Cuero, TX and tested in a lab. The examination concluded that the Chupacabra is a type of Coyote; however, it looks nothing like a coyote. Another intriguing situation occurred when a Dewitt County Sheriff was patrolling a county road spotted what appeared to be the Chupacabra. He captured the occurrence with his dashboard camera and was able to air the footage on television via the news. The alleged Chupacabra was galloping for a good length of time, as it appeared to be running from the sheriff’s car as it was traveling slowly behind it. In the slow pursuit, the Chupacabra looked directly to the left and the head profile was captured, and revealed that the carcass tested in the lab was extremely similar.

Whether or not the myth has proved true over the recent footage and exposure, the tale will probably always circulate. This Chupacabra phenomenon may only be understood fully in time, as more encounters and findings surface. It leads us to another eerie myth that the Mexicans tell of the La Chusa. The La Chusa is a bird type animal that has a woman’s face and comes out only in the night. The tale is told that if La Chusa is whistled at, then it will be prompted to attack with its powerful claws. Although this tale of the La Chusa has no proof of existence, so too, it may surface, as did the Chupacabra.