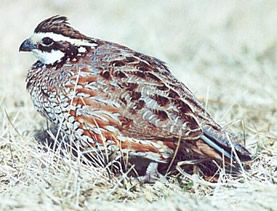 The Quail is a small, ground-dwelling member of the avian species. Weighing only five or six ounces as full-grown adults, the birds command respect not because of their impressive size but rather for their crafty survival instincts. Male and female are differentiated by the coloring on their faces; males have a white masking while females have a brownish-yellow tint in the same area.

Quail typically spend most of their lives on the ground but have occasionally been seen nesting in trees. They eat, sleep and build their nests on the ground and only take to the air when threatened by danger. Small fields surrounded by thick brush and vegetation are ideal homes, as they provide easy access to food as well as nearby cover from predators.

A quail’s diet mostly consists of seeds; wheat, millet, lespedeza, sorghum and corn are common in the quail’s diet. A chicks are quite different. During the first few weeks of a chick’s life, they depend mostly on small insects for their food. Habitat that is rich with these bugs is essential in maintaining healthy quail populations.

Except during the breeding season, they can be seen in coveys of five to thirty birds and can roam areas up to 40 acres. Quail travel in coveys to help protect each other. Forty or sixty eyes are better then two, and when a predator does approach, the noise and scattering of a large amount of quail often startles and confuses an approaching predator.

During the winter, a secondary benefit of the covey is warmth. Packed tightly in a bundle with the birds on the outside facing away from the center, quail on the inside of the bunch are insulated from the cold by the others in the group. They take turns, each serving its time on the cold outside as well. For this reason, coveys may be larger during the winter than in warmer months.

The hen lays a clutch of ten to fifteen eggs at a rate of one per day. Mom and dad share the incubation duties, and if all goes well, the chicks appear in about 23 days. If something does prevent the eggs from hatching, the pair will continue trying to raise a brood until as late as October. This innate drive to reproduce is one of the reasons that quail continue to survive in the face of colossal odds.

Seventy five to eighty percent of the birds hatched in one season will not live to see the next. This figure holds true even on a plot of land that is not hunted, which may be surprising to some. Quail are such a delicacy to predators of the fields and forests that, for a newborn, surviving long enough to raise a brood of its own is a struggle against the odds.