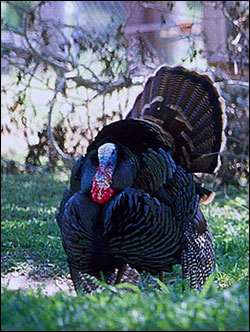 The Rio Grande wild turkey is native to the southern Great Plains states of Texas, Oklahoma, Kansas and Northeastern Mexico. It received its common name from the Rio Grande River, which is the water supply bordering the brushy scrub and arid country of some of its prime range in western Texas and northeastern Mexico. They have expanded their range and been introduced into Nevada, Oregon, Washington, Wyoming, Utah, South Dakota, and California. This race of turkeys generally occurs in areas having 16 to 32 inches of rainfall.

The Rio inhabits brushy areas near streams and rivers or mesquite, pine and scrub oak forests. It may be found up to 6,000 feet elevation and generally favors country that is more open than the wooded habitat favored by its eastern cousins. The Rio Grande is considered gregarious and, nomadic in some areas, having distinct summer and winter ranges. They may form large flocks of several hundred birds during the winter period. They have been known to travel distances of 10 or more miles from traditional winter roosting sites to its nesting areas. Since the areas they are found usually do not have many roosting trees, they will often se the same tree which makes finding them a lot easier. Their range in a lot of cases is determined by the location of their preferred roosting tree, the cottonwood.

The Rio Grande turkey, at full maturity, is approximately four feet tall with a slightly smaller body size than the Eastern wild turkey. It is pale and copper color having tail feathers and tail coverts (short feathers located at the base of the tail) tipped with a yellowish buff. An alternating color pattern includes tan feathers with medium or dark brown buffed tips. The Rio Grande’s color is consistently lighter than the Eastern turkey, but is darker than the same feathers in the Merriam or Gould subspecies. Feathers on the hens breast, sides and flanks are tipped with pale, pinkish buff.

Originally existing in the millions, this turkey had depleted to extremely low numbers by 1920. Formal programs involving trapping and transplanting were initiated in the 1930's and today it exists over much of its ancestral range. Texas has the most Rio Grandes with a population estimated at over 600,000 birds.