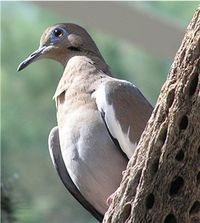 The White-winged Dove is a dove whose native range extends from the south-western USA and down through Texas and into Mexico. Its name is derived from the noticeable white-marked feathers on the upper wing surface. The tail is shorter compared to wing length, and more blunt or rounded when compared to the mourning doves' long, pointed tail. The call of the white-winged dove is distinctive with a loud cooing sequence.

Most populations of White-winged Doves are migratory, wintering in Mexico and Central America. The White-winged Dove inhabits scrub, woodlands, desert, and cultivated areas. It builds a flimsy stick nest in a tree and lays two white to slightly off white, unmarked eggs. Its flight is fast and direct, with the regular beats and occasional sharp flick of the wings that are characteristic of pigeons in general.

White-winged Doves are large, chunky pigeons at 29 cm. They are brownish-gray above and gray below, with a bold white wing patch that appears as a brilliant white crescent in flight and is also visible at rest. Adults have a patch of blue skin around each eye and a long, dark mark on the lower face. Their eyes, legs, and feet are red.

White-winged Doves feed on a variety of seeds, grains, and fruits and can be an agricultural pest, descending on grain crops in large flocks.