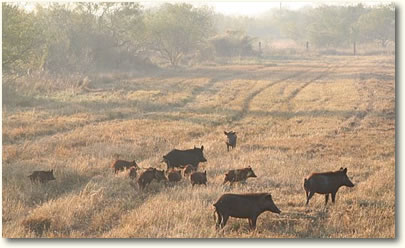 There are currently an estimated 5 to 6 millions feral hogs living within the United States; half of which are located in Texas.  The hogs are terrorizing and destroying national parks, farming fields, ranches and recreational areas.  Annually they cause an estimated $1.5 billion in damages nationwide, $52 million in Texas alone.  Thier population has steadily been increasing and most recently seemed to experience some what of a boom.

Feral hogs (feral meaning not domesticated or once domesticated) are tough and highly adaptable to just about any condition.  They can be found in the hot and humid brush of South Texas to the cold and unforgiving climate of Canada.  They’ll eat just about thing they can get their snouts on and uproot anything to get to it. They’ve been know to destroy whole crop fields of watermelons, soybean, corn and so on.

Feral hogs can reach a height of 3 feet at the shoulder and commonly weight in the 100 to 400 pound range.  They have wiry stiff hair that varies in color, long whiskers, poor eyesight, and excellent hearing and smell.  They have four tusk, two on the top and two on the bottom.   The tusk are in constant contact with each other causing a sharpening effect on the lower tusk.  Hogs are quite intelligent and are very good at avoiding traps set by hunters.  Hogs are very intelligent and learn from failed attempts or close calls with hogs traps.

Feral hogs are able to start breeding as young as 6 months of age. Gestation is typically 115 days, giving way to 4 to 6 piglets on average.  Sows are capable of producing two litters per year, however most only produce one litter per year.  Texas A&M University found that the feral hog population will triple in the next 5 years unless serious efforts are made to slow the population explosion.

What has Texas and many other states decided to do about it?  Hunt them almost any way you can.  Almost!  In the state of Texas there is no season or bag limit for feral hogs.  There are no size minimum requirements.  You can hunt them in the day, at night, with a spotlight (if you notify the local game warden), night vision or thermal optics, baited field, stalk, dogs, cross bow, by helicopter and so on.  “Wow” you say, “are there any rules to hunting hogs in Texas?”  Yes!  According to Texas Parks and Wildlife, A hunting license is not required to hunt.

This sounds great on the surface but if you plan to hunt feral hogs in Texas without a hunting license then be prepared to prove that you have explicit permission from the land owner to kill or attempt to kill the hogs on their land.  You must also be able to prove that the hogs your hunting are classified as “depredating hogs”.  Depredating means to Plunder, Ravage or Lay Waste.  If you're prepared to state your case to the local game warden then hunt away. It would be much easier to purchase a hunting license weather you’re a resident or nonresident if you're planning on a hog hunt for a few different reasons. For one, by purchasing a hunting license it allows you to legally hunt many other forms of game within the state of Texas.  Second, by doing so you're guaranteed to avoid hefty fines.  Third, it won’t ruin your day.  And finally forth, you can contribute to the cause of helping the state of Texas continue on with their conservation efforts.  And of course every hunter born on or after September 2, 1971 must complete a hunter safety course.