I usually get quite a few emails from people asking various questions about guns and calibers. So, I’ve decided to put together a series of articles explaining some of the basics, and hopefully answer some of the frequently asked questions that some people might have.

The first and most important thing about any kind of shooting sports or gun handling is safety. I would suggest signing up for a hunter’s safety course to learn fundamental gun and hunting safety skills as well as hunting ethics, responsibility, wildlife management & identification and outdoor skills. These courses are inexpensive, required to legally hunt in almost every state, and can even be completed online. For more information on the Texas Hunter Safety Course, visit the Texas Parks and Wildlife website.

A shotgun shell is a cartridge loaded with shot (small bbs) or a slug (solid projectile), both of which are designed to be fired from a shotgun. Shotguns are typically smooth-bored barrels designed to fire shot while bird hunting, shooting sporting clays or self defense. There has, however, been a recent gain in popularity for rifled barrels for firing slugs while hunting for larger game. The rifled barrel greatly increases the accuracy of the slug by causing it to spin in flight creating a straighter flight path. Shooting shot through a rifled barrel is not recommended as it destroys the shot pattern by pushing the pellets to the outer edges of the pattern creating a hollow “O” shaped pattern.

There are four basic types of shotguns.
Single Shot
A single shot shotgun is a gun that only holds one shell at a time. They are typically the least expensive type of shotgun available, mainly because you only get one shot before you have to open the breach and reload a new shell before it may be fired again. These types of guns are great for the inexperienced or youth as they tend to be safer with only one shot at a time.

Pump-Action
Pump-action shotguns are the most common type of shotgun, they are reliable and typically on the lower end of the price range. These guns hold multiple shells and require you to pump the forend after each shot to eject the spent shell and load a new shell.

Auto-Loader
These guns are also known as semi-automatics and use a variety of different automatic systems to eject the spent shell and load a new shell with only the pull of the trigger. This type of shotgun also tends to have less recoil (about 30% less) due to the automatic cycling action absorbing some of the recoil. Automatic loading shotguns generally are more expensive than pump-action and depending on the quality of the gun, they can be as reliable as a pump-action.

Double Barrel
A double barrel shotgun is a gun that only holds two shells at a time and can be found in one of two styles; over/under or side-by-side. One of the main advantages of a double barrel is that a hunter or shooter can insert a different choke into each barrel; this increases the chance of a successful shot which can depend on the distance of the target. Due to reliability and usability, double barrel shotguns tend to be the most expensive of all the shotgun types. Magazine fed guns need about 3 extra inches of barrel to allow for the action cycling of the gun which makes the barrel of a double barrel shotgun shorter and lighter. These guns are usually well balanced and swing effortlessly with a natural feel to them. Without a place to hide, a shell can be seen at a quick glance, making this gun type one of the safest. Due to the fact that the barrel is not connected to the firing action, double barrel guns may be broken open when you’re carrying your gun around camp or to your hunting spot without the chance of an accidental discharge.

Shotgun Barrels
When selecting a shotgun, considering the barrel length is very important as it affects the handling capabilities and accuracy of the shotgun. Longer barrels provide a smooth swing and help to provide a good follow through, but unfortunately they do not have a fast swing. They are more ideal for longer shots, as they provide an increased sighting plain. Shorter barrels allow the shooter to swing quickly and site in on close targets such as flushing birds or skeet. Considering a shotgun that has interchangeable barrels would give you the best of both worlds, you will pay more up front but having this ability would allow for different barrel lengths and even the ability to use a rifled barrel giving you the option to have one gun for all situations.

Choke Tubes
A choke is a tube usually a few inches long that is inserted into the end of the barrel which is used to restrict the shot pattern or disbursement of the pellets. Choke tubes generally come in a few basic sizes, Cylinder Bore which is the widest pattern, Improved, Improved Cylinder, Modified and Full which has the tightest pattern. You will use the chokes with the widest pattern for your closer shots and your tighter patterns for your long distance shots. When looking for a shotgun, it is advisable to select a gun which allows you to insert different chokes as opposed to a gun with a fixed choke which limits your versatility. [+ Learn more here] 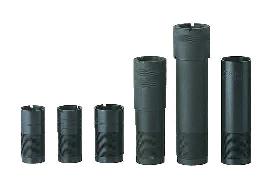 Gauge
A gauge is an English measurement used to describe how many lead balls with the same diameter as the bore of the barrel it would take to weigh 1 pound. Ex: If you took lead balls the same size as the bore of 12 gauge barrel, it will take 12 lead balls of the same size and weight, before you have 1 pound of lead balls. Same for a 20 gauge shotgun, it would take 20 lead balls with the same diameter as the bore to equal 1 pound. If you can visualize this, you can see that the smaller the gauge the larger the barrel and shell. The one exception to this is the .410. This is actually measured in diameter and not gauge and if converted to a gauge it would be a 67 or 68 gauge. 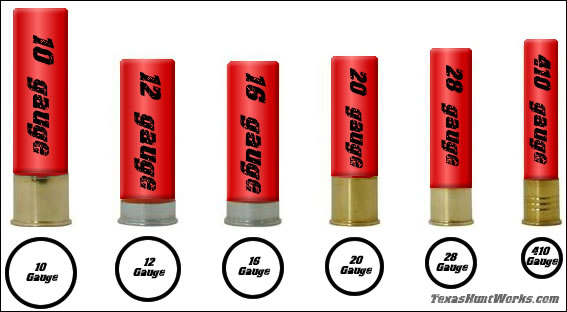 Shotgun Shells
As I mentioned earlier, a shotgun shell is a cartridge loaded with shot (small bbs) or a slug (solid projectile). Most people use a shotgun to fire shot and not so much slugs, even though a slug makes a great weapon for hunting larger animals. When selecting the type of shells to use, you must consider what type of game you will be hunting and the average distance of the shot you will be making. Bird shot is numbered similar to a shotgun gauge, the larger the number, the smaller the pellet. When shooting larger game such as pheasant a smaller size like a 4 or 5 is best. When hunting Dove and Quail for example, a 7 ½ to 8 would be a good choice. The size also has a lot to do with the distance of the targets you will be shooting. The larger the number, the smaller the pellets, the less distance the shot will cover. Smaller sized shells have larger pellets which stay grouped longer and can travel farther with more momentum. [+ Learn More]

Gun Fitting
One of the most important things a person can do to improve their shooting is to have a properly fitted shotgun. One of the main keys to shooting consistently is to be able to quickly shoulder your gun the same way every time. Gun manufacturers make guns that fit the “Average Joe”, who happens to be about 5’ 9” tall, weigh 190 lbs, and wear a size 33 shirt sleeve. But how many of us actually fall into this category? Not very many. Just as a professional golfer has their clubs custom fitted, a shooter should also have their gun custom fitted. When you shoulder your gun, it should mount in the same spot on your shoulder each and ever time, you should not have to mash your cheek down on the stock to get the proper line of site and your head should not lay over on the stock. The idea is to be able to shoulder the gun and it naturally point to where you are looking without having to make adjustments.