RENO, Nev. (AP) -- It's not all checking hunting and fishing licenses. Sometimes the issues are bigger. Like when a Nevada game warden was handed the chore of figuring out how to separate two bull elk that locked horns while sparring and couldn't untangle them. 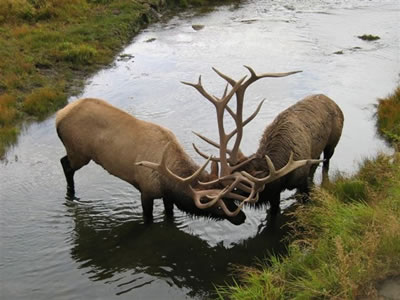 The saga began Nov. 21 when a rancher in Reese River Valley spotted the two elk. By the following day, the animals were gone and the rancher assumed they had separated.

A week later, according to Nevada Division of Wildlife biologist Tom Donham, the rancher was out looking for some of his cows and saw the elk again. This time, he called the wildlife department and Donham, game warden Brian Eller and Bureau of Land Management wildlife biologist Bryson Code headed out to see what they could do. When they reached Indian Valley, south of Austin, it was Nov. 29, one week after the elk were first seen. 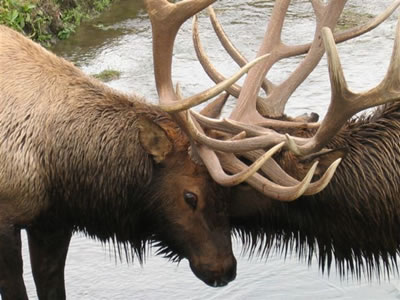 'When we arrived where the rancher had last seen them, we found them pretty quickly. They were both lying on the ground and one of them was in a very uncomfortable looking position with his head directly above the others head and his nose pointing straight up to the sky,' Donham said. Eller said he wondered if they had survived their ordeal.

The elk may have been sparring at the outset, but Donham and Eller say they used teamwork to run for nearly a mile to evade the newcomers. 'It looked like they had been doing it all their lives; serious cooperation if I've ever seen it,' Donham said.

After two unsuccessful attempts, Donham was able to get a tranquilizer dart into one of the elk. With one down, the other could not run, but was also partially tranquilized in order to separate the two

Eller and Code helped hold the elk down while Donham used a hand saw to remove part of an antler off one of them.

'As soon as they were apart, the bull that hadn't gotten a full dose jumped to his feet and Bryson, Brian and I quickly gave him all the room he wanted. He went off about 30 yards and lay down for about 10 minutes before finally walking up the hill and over the ridge, none the worse for wear' Donham said. The other elk was treated with antibiotics and eventually walked off as well after the tranquilizer had worn off.

'If these two bulls had not been discovered, and we never got the call, they more than likely would have both died. Watching the bulls walk away, and knowing that we likely saved them from a slow death was definitely one of those moments that makes this job rewarding.