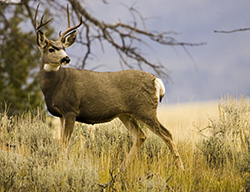 The mule deer is a moderately larger deer than a typical whitetail deer. These deer reside in the Trans-Pecos area, Texas Panhandle and a few areas to the east, mostly as a result of being imported to these areas. Mule deer prefer areas of habitat which are open and where there is an abundance of sagebrush, juniper, pinon, yellow pine, mountain mahogany and bitter brush.
Mule deer typically run at speeds around 30 km per hour but have been clocked at speeds in upwards of 55 km per hour for a very short burst. They are at their best in rocky broken terrain where their high bouncing gait comes into play. This allows them to travel at high speeds over the rough terrain. This really comes into play when traveling downhill or leaping across small creeks. Mule Deer also have an excellent sense of sight and hearing however they rely mostly upon their sense of smell.
Mule deer do most of their feeding in the early morning hours before sunrise and in the evening just after sundown. During the day most of their time is spent bedded down in cool, shaded secluded places, while in the winter months time is spent in open sunny areas. They generally prefer rocky, rough terrain to bed down in as it gives them a sense of protection from other predators. At night they choose to bed down in open areas away from trees and large rocks.
Their diet varies depending upon location. In the Trans-Pecos area, they choose the stalks of the lechuguilla, mesquite, juniper, various forbs, green herbs, green leaves, and grasses make up most of their diet, while in other areas sagebrush, juniper, pinon, yellow pine, mountain mahogany and bitter brush is the primary source of diet.
Their antlers usually shed shortly after the breeding season around late January to late April. Mature bucks tend to loose their antler by late February and immature bucks loose their antler a little later. New growth begins immediately and massive antlers are usually fully-grown in about 150 days. Beyond 3 years, there is little or no correlation between the number of points and age.